Stuart Mason’s new record “Tradition” was released on May 26, 2015. Stream it or order Tradition HERE.

* Why do a solo album now? Is there a particular creative statement you are making with this record? 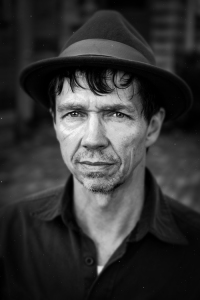 Tradition is my second solo record; the first was many years ago. My original plan was to record a collection of all originals, but I changed my mind and decided to record a collection of all American public-domain pieces. My gut told me that this made sense because a trad record was more likely to appeal to our current followers (my bands Molly’s Revenge, Little Back Train) as well as my venue contacts. This may sound like a purely fiscal decision, but the fact is that I dearly love the old songs and I felt contented once I had charted that new course, and it blossomed into something big enough to stand alone.

* Does the title Tradition have a significance beyond the public domain folk origins of most of the tunes?

​I am also a visual artist. The graphic I developed for this project​ ​has a deer skull as its centerpiece.​ We have plenty of deer out here in California, but you don’t see people driving around with dead ones tied to the hood of their cars. Deer hunting is an annual tradition in West Virginia, where I was born and so was my father and grandfather. So the deer skull is to me a symbol of mountain traditions that tell me who I am and where I came from. I think many artists who delve deep into old-time music also dabble in a more traditional lifestyle; for example they might grow their own kitchen gardens in summer and split a huge woodpile in the winter. I have heated with wood in every house I’ve had since right after college. Traditional music is a way for people to connect with their heritage, whether it’s Delta blues or Tex-Mex or Scandinavian polkas. It can be a reminder of a simpler time, and a part of some larger commitment to a simpler, more rural lifestyle.

* Where do the traditional songs come from – are they from different eras and cultures? How do they fit together as a whole on this album?

​I think all of it reflects my family roots and formative years in southern Ohio and West Virginia. My sources range from North Carolina fiddler Joe Thompson to M​issouri collector Max Hunter, but most of the songs I would consider to be standards in the old time music world. I wasn’t on a mission to uncover obscure rarities, but rather to capture my arrangements of a handful of chestnuts that I have been singing for years. I threw in two sets of instrumental tunes as well, just to spice the collection with some sweet old melodies on mandola and guitar.

I think the defining sound on this record ​is that of my fretless tackhead banjo. Banjo maker Jerry James and myself designed and built this instrument from a mail-order frame drum and a beautiful walnut neck carved by Jerry. At the time I was listening to lots of 19th century banjo music and learning about the repertory of the hugely popular minstrel shows of the era. I started adapting some of my repertory to the instrument and I loved the mellow tone and lower-pitched tunings for certain songs. (My tackhead sounds best in F, a step down from normal.) ​Long-time fans who are accustomed to hearing me play my old Martin axe or Gibson 1918 mandola​ will hear that too, but the fretless banjo is something new in my sound.

Looking at the track list, it’s apparent that midwestern blues man Charlie Parr influenced me with some of his old gospel stuff. I did not intend for the record to have so much Jesus on it, but it makes sense because gospel music is huge in West Virginia and all of the eastern mountain states. Another influence is the akonting, a distant cousin of the banjo ​from Africa. A couple of ​the arrangements incorporate my own trancy, looping banjo licks​, ideas​ that came directly from my exposure to West African akonting music.

* I take it that a number of the players on this album have worked with you before in Molly’s Revenge and elsewhere. How did you choose this particular mix of musicians?

​I went into this project with the goal of keeping it simple and recording songs that I could perform live in a solo or duo setting.​ But it’s only natural to include your bandmates, and being in four bands I had plenty to choose from, so some of the arrangements gradually got more complex. ​You might call it feature creep, but I prefer to think of it as a community effort.

Amber Cross, who sang harmony on four tracks, is a bandmate and singer-songwriter with an amazing vocal timbre that​ ​sets the perfect tone for that archaic sound. ​(And her chickens lay very tasty eggs.) ​Fiddler Gary Arcemont has deep family roots in French Acadian music, and fortunately he was happy to tune down one of his fiddles to F and contribute ​an authentic vibe to this record.

I was able to include slide wizard Tony Furtado at the last minute. I happened to notice that Tony was coming to town for a couple of local shows, and contacted him about playing on the album. When he came into the studio, we ran his old Martin flattop into ​Steve’s 1959 Valco tube amp and got some fat tones by mixing the signal from his pickup with the pure acoustic sound. Tony did his homework, came in and nailed his parts. His participation added a lovely dimension that was not part of my plan, but just shows that sometimes it pays to be opportunistic and flexible.

* What is co-producer Ryan Davidson’s background? What was working with him on this album like?

​I know Ryan Davidson though the trad Irish community in California –specifically the Chico scene, which has consistently produced great players over the years. (Fiddler John Weed, who also plays on this album, is another survivor of the Chico music scene.) Ryan and I typically run into each other a couple times a year, at a festival or a show, play tunes until the wee hours, and promise each other that we would find some way to collaborate. His eagerness and skill on the bass fiddle made him an obvious choice, and after working together for a while he proved to be invaluable. He is a trained ethnomusicologist, a luthier, and a singer-songwriter to boot, and when we started my album he was just coming off a solo project of his own. Working with Ryan was a kick–he has a great sense of humor, a serious work ethic and creative ideas as well. We both love traditional music whether it be American or Irish, and we write from that foundation, so we have a lot in common between us.

* How does this album connect with your own story and your West Virginia roots?

​My first solo ​record Appalachian Bride ​​focused on my West Virginia roots, with a mixture of original songs and traditional mountain music. I think this new record might be less self-centered and more about some of the great old songs that we sing around here when we get together to play music. There is an old time scene here on the Central Coast. I think we’re known for it and we’re very lucky to have it.

I invented the word “oldternative” to try and describe my approach to old-time music. Before the advent of commercial recording technology in the 1920s, American music was not yet homogenized. You had your Celtic ballads, primitive Gospel, field hollers, wedding dances, fiddle tunes, broadsheets, hits from the minstrel shows. All of this fed into the bluegrass phenomenon and eventually, what is now Nashville country music.

Bill Monroe wasn’t the only innovator, but he was a very influential filter on this process, along with the Carter Family, of course. It’s almost like you have an hourglass, and you pour all of the old, wierd Americana into the top, and out the bottom comes country music. But what if you went back to all that good old stuff and you modernized it, without the bluegrass influence? That’s what I call oldternative Americana. Old is the new alternative.

I use a banjo on this record, but it’s not anything like what a bluegrasser might play. My banjo’s design was inspired by 19th century minstrel banjos. The skin is tacked to the pot, the neck is fretless, and the strings are made of Nylgut, tuned a step below normal. I use a mandolin, but it’s a 1918 Gibson mandola with flatwound strings, bigger and lower-voiced than a bluegrass mandolin, and in a Celtic tuning. I sometimes utilize studio effects like telephoned vocals, doubled vocals and stomping feet. On one track, I clacked a set of deer antlers to the beat, because it sounded good to me. I just try to listen for what the song calls for, rather than trying to fit it into any formula.

* Any stories from the sessions that you’d care to relate?

​The album was recorded at Painted Sky Studios in the tiny hamlet of Harmony, CA, which is located about halfway between Cayucos and Cambria along the world-famous Highway 1 Big Sur route. You blink and you miss it–most people do. The big sign says Harmony: Population 18. The biggest building is a former creamery and everywhere you look, there are historic markers, rusty tin roofs and weather​e​d wood facades. ​​Apparently there was a time in the 19th century when a big feud took place in the valley, with multiple revenge killings, until finally a truce was called. Part of the solution was to rename the place Harmony.

2 thoughts on “Q&A with Stuart Mason”